Sending our best wishes to you for a wonderful 2017!

We want to take a moment to thank you for following our page and we hope you’ve enjoyed our posts!

Dogs, in Kongo culture, are animals to whom clairvoyant powers were attributed.

Their role was to protect the village from the evil spirits. Our power figure is a sitting dog with its mouth open, watchful, alert, protecting the surrounding area.

The decontextualisation of cultural artefacts 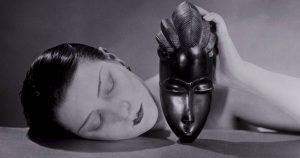 Going by what happened during and after the French Revolution, the word ‘contextualisation’ can be defined in the following terms where African objects are concerned: it involves a process whereby a cultural artefact is removed from its original context in order to be placed into a relational framework of a different kind, perhaps even of a different culture.  Read =>

Depictions of ‘mother and child’ are commonly found in numerous cultures, reimagined multiple times over the course of history. As well as recalling this universal image, each civilisation uses the ‘mother and child’ to emphasise the specificities of its own history, making a direct connection with the moment of origin as told in its creation myth.

A universal theme, the ‘mother and child’ is a subject that is found as commonly in African cultures as in others (Western, etc.). It can be expressed in different kinds of art (for example, sculpture and painting) and evokes a fundamental feature of humanity.

Picasso took from the Lwalwa masks the crest of the nose, the central element of the face, which, highlighted with balance and elegance, gives rhythm to the overall object. By using rounder lines than those present on the masks, Picasso suggests the softness of female facial features, despite suggesting an imposing appearance. Other elements of the face, the eyes and mouth, are amplified in the same way as on the Lwalwa mask. Picasso appears to be experimenting with the same principles: not deforming the facial features, but harmoniously accentuating them.

Marie-Thérèse Walter, Picasso’s muse and mistress, is therefore given a fixed and calculated appearance, her extremely sculptural face resembling a mask. Her eyes have an interrogatory quality, like those of a sphinx ready to set a puzzle.

Currently the sculpted portraits of Marie-Thérèse Walter can be seen at an exhibition in the Musée national Picasso-Paris : (March 8 – August 28 2016)

The historical context of Europe in the fifteenth and sixteenth centuries produced the first manifestations of the ideologies that contributed to the creation of colonies on the African continent. The rise of the bourgeoisie within the economic system allowed them to impose their ideas on the development of societal attitudes, principally in regard to the value of the economic market and technological progress, which brought wealth.

The discovery of other continents was therefore motivated by the search for new goods to trade.

The first European expeditions to the African continent were undeniably commercial in nature and go back to the fifteenth century. They took place first to the coasts and enabled the establishment of trading posts. The first maps of Africa, as it was known at the time, date from the end of this century. The Portuguese colonised the western shores of Africa in around 1444. At this time, Dinis Dias, a Portuguese navigator and explorer, reached the Senegal River, during his second journey to Africa.

African artists are rarely quoted or mentioned. What comes first is essentially the impact of the work of art itself. As the art, usually masks and sculptures, often relates to religion, what is important is the object and its role in ritual.

Our lack of knowledge about the artists can be explained by several factors: from a “local” point of view focusing on its origin, as in the previous paragraph, the object itself is more important than the person who made it, because it has a specific function for its owner; from a “scientific” point of view, seeing African art has not always helped us learn more about its artists, and so, in the words of Susan Vogel, “to contradict the stereotype of an art that emanated almost unconsciously from a collective culture, anonymous and devoid of history – a notion of sub-Saharan Africa that had left outside the history of art to which art museums and art history departments were dedicated” (1998, 44).

According to Pierre Harter, these figures are used in an ancestral ritual. But, in contrast, Viviane Baeke suggests that these sculptures belong to the so medicinal ritual. But according to F. Hermann, the Keaka people could be the only cultural group with this kind of figure, the paternity sculpture.

What we understand about paternity figures is associated with so association, known in this border region. Laburthe-Tolra suggested that old initiated men became like women, with the ability to give birth. Then, new initiation candidates know a « social birth ». This particularity is symbolized by the child in the back of male figures.

Morphological characteristics of these male standing figures are bent legs and arms, an elongated body, ending with a head, schematically shaped, with a « beard » or a « V » hair style. The face is often carved with a cavity for the mouth and, sometimes, only vertical lines for the teeth. The patina is another important element that gives strength and mystery to these male figures. Looking at all paternity figures, some of them are taller (elongated) than others (stocky).

SACRED OBJECTS – THE IMPORTANCE OF SECRECY AND KNOWLEDGE

To begin with a concrete example, found among the Guro people of Ivory Coast, the three gu, zamble and zauli masks are sacred objects, used during sacrifices performed in the home. As a result of the masks’ sacred quality, women and the uninitiated were subject to a formal interdiction that forbade them from seeing the masks when they were not being worn (Fischer 1985, 26).

These two aspects cultural practices and an interdiction based on the object’s visibility are the principal elements of the sacred that affect the objects we are concerned with.
In the same way, blacksmiths’ tools from the Luba people of the Democratic Republic of Congo (3) are seen only at royal coronations: at other times, nobody is allowed to look upon these objects, which are kept in a sacred protected area (A. Roberts 1998, 70).

The relationship between people and objects is established in a sacred context, governed by sacrifices and interdictions. The object is a medium invested with powers that allow human beings to communicate with supernatural beings and spirits.
In the Ashanti civilisation in Ghana (4), fertility dolls, akua-ha, are fed by their owners (A. Roberts 1994, 44). 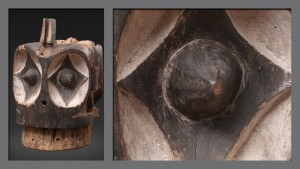 This Janus helmet mask is decorated with pigments (kaolin in circular cavities). The head and the eyes are totally stylized with geometrical forms.
The colours generally used for this mask are white, red and black; there is symbolism associated with each colour.

A mighty and powerful piece of art, this mask belongs to the Alunga secret society. Alunga, the bush spirit, is honoured during ceremonies. Male dancers with Alunga masks must be directed by another man, because like the spirit itself, they are blinded. According to Pol P. Gossiaux, the name of the mask is”echwaboka”.

They live near Lake Tanganyika, with the Boyo and the Hemba as their neighbours. The history of settlements in this region was studied by Daniel Biebuyck (1981). According to him, the Bembe people had their origins on the shores of the Lualaba River. Hunters migrated in waves from the East, before finally settling near Lake Tanganyi

This prestigious (precious) bowl originally contained kola nuts, used in a traditional gesture of hospitality, presented to guests and offered to deities during rituals.
Several elements of our sculpture (hairstyle, scarifications…) can be found in the works of Olowe of Ise, but it is not certain proof of his work.

OUR SUBJECT IS ORGANIZED INTO THREE PARTS:

• First, we have the ovoid bowl with its decorative, zoomorphic top (two facing birds), held by two kneeling women with elevated hairstyles.

• Under the bowl, two pairs of caryatid women (two standing and two kneeling, with one holding her breasts).

• And finally, the pedestal is decorated with twelve faces (some of them with beards), and a male head laid down in the middle. The women holding the bowl display scarifications on their chest, neck and back. Caryatids refer to the important role of women in the Yoruba society.

If you are unable to find the information you are seeking on AntiquesAfrica.com , please feel free to  contact us directly.

Based in the heart of Brussels. Open by appointment only See map